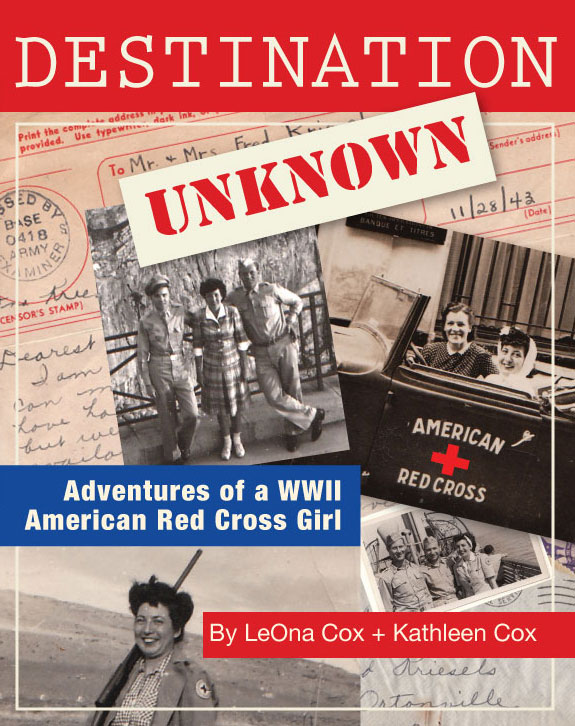 Her name was LeOna Kriesel; the year was 1942. LeOna was a 27-yearold instructor at Allegheny College. One day a friend and Allegheny colleague revealed that he was also a recruiter for the American Red Cross.

“LeOna,” he said. “I’ve been observing you and I believe you have what it takes to be a Red Cross Girl. Would you be interested?” In an instant LeOna replied, “Would I? You bet I would!”

LeOna was my mother; a proud American Red Cross girl who ran social clubs for enlisted men in North Africa and Italy from 1943 until 1945. She was a colorful character who told her story through letters and photographs. I have compiled them into a book: Destination Unknown, Adventures of a WWII American Red Cross Girl.

As a speaker I tell my mother’s stories as she told them to me a million times. Fortunately my audiences are far more appreciative than was I, hearing them over and over. It was the most exciting time of her life and her story is truly wonderful.

LeOna Kriesel Cox is featured in the permanent collection of The Women in Military Service for America Memorial in Arlington National Cemetery. The Special Collections & Rare Books, Elmer L. Andersen Library, University of Minnesota. In a ceremony at American Red Cross Headquarters in Washington, D.C., LeOna was posthumously awarded the Legacy Award, a Certificate of Exemplary Service.

“Away from the smoke and the bullets but close enough to the colorful characters, a plucky Red Cross girl tells of her place in World War II’s Mediterranean Theater.

Wars are also fought from behind the front lines. This tale shows one woman and her Red Cross colleagues turning a small wheel in the massive American war machine of 1943.

Debut author Kathleen Cox turns wartime letters and snapshots from her mother, LeOna, into a readable, often charming path from rural Minnesota to East Coast training and to following in the footsteps of the U.S. Army in North Africa, eventually onward to occupied Italy.

Endearingly, the story lacks any pretense to bigness. At each stop, the elder Cox’s job was serving coffee, manufacturing pastimes for GIs, rooting out local embezzlers and, through it all, assuring her Minnesota parents that her adventures carried not even a whiff of danger.

She hears of the Normandy landings through news reports, probably no sooner than her stateside friends; even a drive past Cassino, site of some of the heaviest fighting in the Italian campaign, comes a month after the Germans had been driven out. The named and nameless soldiers bask in simple things: talking to an American girl, swimming in a pool and treating the local children to ice cream.

LeOna’s Red Cross service and her romance both show the power of the social economy among the troops and their supporters. Knowing the right people or simply charming the right enlisted men could get you a car or even an upgraded room at a seaside palace.

The heart of the book, and an understandable focus for the younger Cox, is the story of LeOna’s romance with John Cox—a courtship that included drives through the Atlas Mountains, some innocent stowing away on a B-24 and (as Leona tells it) a small bargain with Pope Pius XII.

A fresh, rarely seen perspective on life during wartime.”

“I put your book down long enough to tell you: I can’t put your book down! Laundry, dinner, baths – will all have to wait tonight! I am currently in Italy with your mom. Thank you so much for sharing this wonderful story with us!”

It was hard for me to put the book down. I laughed, held back tears, and because of LeOna’s writing style, I easily imagined myself being in the many places she visited.

I feel that I have missed something in life by not knowing LeOna, but I have come to learn of her because of your wonderful book! Today, billions of people walk on this earth; I expect there may be only one, of those billions of people, that can say their mother negotiated with the Pope for her wedding in Rome, Italy.

I loved:”You know me I believe you can do anything if you’re stubborn enough.”

I felt personal sorrow when I read that her life had been cut short by such an debilitating, lingering disease.Thank you for sharing a bit of the life of your Mom and Dad. I loved the book! Thank you!

A destination worth the trip!, “This book is a rich tapestry of photos and letters; a true archival treasure. It was a vicarious and thrilling ride with a soft soul who was truly a member of the greatest generation. It is a personal history that brings the reader to a specific point of a great and expansive campaign. It was a delight to get a glimpse of such a strong and valuable woman.”

Entertaining and educational  “This book is a fabulous read. It’s an entertaining story about a great woman that also shows a slice of life during the WWII years. We sometimes think, as modern women that we invented the whole “I am woman, hear me roar” thing, but this book shows that every generation has had bold, adventurous, funny, strong women. I am recommending this book to all my friends and encouraging all my teacher friends to use it in their classrooms. I hope the author shares the next part of the story. I would love to hear what it was like to be raised by such an an amazing woman (and from what we learn in this book dad seemed to be a great guy too).”

The story begins with a three-month training program in Washington, D.C.
“Dearest Mom & Dad, Training began today and I’m thrilled to death with everything.”

It continues on board the Empress of Scotland, November, 1943.
“Dear Mom and Dad, I’m on my way! It’s all so exciting I just have to tell you everything. A military band played as we slowly sailed from port.

Everyone hung from railings and sang ‘Over There, Over there’ with the band.”

To arriving in port.
“We’re here and I can’t believe my eyes! There are Arabs everywhere, just like out of those pageants old Mrs. Duel used to put on when we were kids.”

From 1943 until 1945, LeOna Kriesel told of one adventure after another. The clubs she ran were first in Constantine and Algiers, Algeria; then she was transferred to a club in Rome, Italy.

When she finally sailed home, LeOna had ridden a train across North Africa, saved a medic from having his throat slit by a war-crazed GI, ridden in the nose cone of a B24 and a convoy of tanks, met Pope Pius XII, and, cut a deal with him to share electricity with her that was reserved for his address to the work, so the organ could be played at her wedding in Rome. He did. Plus, as a surprise, His Holiness provided an Italian priest who played a second organ!

A reviewer summed the book up by writing, “I loved this book! It made me laugh, it made me cry. I’m only sorry I never got to meet this amazing woman!”