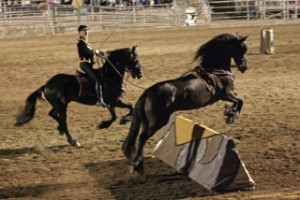 Congratulations To My Friends
Who Will Perform At
Queen Elizabeth II’s Diamond Jubilee!

Coming up May 10, 11 & 13th, Her Majesty Queen Elizabeth II will celebrate her Diamond Jubilee.  Being a horse lover the Queen plans equine entertainment productions that feature some of the outstanding performers I’ve been privileged to work with, and call friends, for many years.

Congratulations to Riata Ranch Cowboy Girls Jennifer Welch Nicholson, Brandi Phillips and Kansas Carradine, Clay Maier and his Friesian Spectacular (shown below), and Michele MacFarlane with her Spotted Saddlebreds, Stagecoach, cowboys and Indians.  What a thrill to see you all honored like this.

If you want to congratulate The Riata Ranch Cowboy Girls, Clay Maier and Michele MacFarlane, and cheer them on, leave a message in the comment box below.  I’ll be sure they get it!

The following has been excerpted from http://www.2012queensdiamondjubilee.com/ 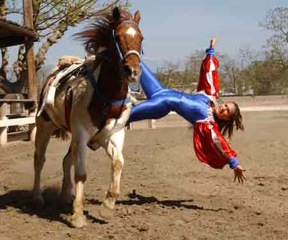 In 2012 The Queen celebrates 60 years since her coronation and London is marking her Diamond Jubilee with a special programme of events packed with exhibitions, processions and pagentry from a grand flotilla on the Thames to a stately procession to St Paul’s Cathedral. Queen Elizabeth II came to the throne on 2nd June 1953 and it’s on this weekend, 60 years later, that the main celebrations take place. Even if you’re not into flag waving, you can enjoy not one but two Bank Holidays, on Monday 4th and Tuesday 5th June, in honour of the landmark anniversary.

Over 500 horses and 800 international performers are to take part in The Diamond Jubilee Pageant in the grounds of Windsor Castle, a spectacular performance that pays tribute to 60 years of Her Majesty’s reign. The pageant is just one of a number of special Diamond Jubilee events in 2012. This special event, which takes place over three evenings on 10th, 11th and 13th May, showcases dancers, musicians, military and equestrian performances from around the world. The seven acts represent different areas of the globe: Great Britain, Europe, The Americas, Australasia, Asia, the Middle East and Africa. The show opens and closes in Great Britain and demonstrates The Queen’s connection with horses, from her racing interests to their ceremonial significance. 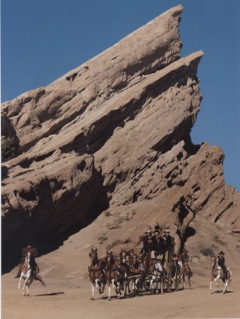 The colourful display includes performances by the Kremlin Mounted Cossacks, the New Zealand Defence Force Band and Maoris, and representatives of the Masai, Samburu, Luo, Kamba and Kikuyo Tribes of Africa – all reflecting The Queen’s State and Commonwealth interests. In addition, a series of educational events exploring the different cultures represented in the Pageant will take place in the ‘Cultural Pavilion’ in the showground during the day. Tickets to the Pageant also allow access to The Jubilee Royal Windsor Horse Show which takes place in the same showground (Home Park Private) during the day. Visitors are asked to take their seats at 8.30pm for the Royal Arrival. The performance starts at 8.45pm and lasts for 90 minutes.