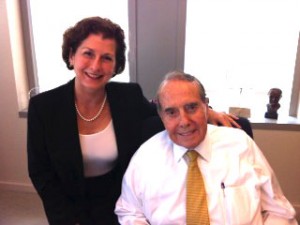 What do you do when seated in a plush, Washington, D.C. law office, across the desk from a legend?  We chatted.  He told me about the pictures that covered his wall:  The entire United States Senate holding a huge sign that wished him well in retirement.  Their signatures and personal sentiments surrounded the photograph.  Pictures of his family and their 13-year-old Miniature Schnauzer, Leader.

We chatted about a recent birthday party he and Mrs. Dole held for Leader in their Watergate home.  “Oh yes,” Senator Dole responded, “17 dogs and not a single fight!”  He said they were animal lovers, I told him I was too.  I shared a story about our Golden Retriever who was best friends with a goat.  Told him the pair often took to the street and headed for town.  Not the thing to do in a Westchester County, NY town, especially not for the new daughter-in-law of prominent residents.

I told him how honored I was to meet him, and how I had once wanted to become a United States ambassador.  I said I hadn’t factored in a little thing called the Foreign Service Exam, or the glass ceiling that was a 1967 reality.  So,” I explained, “I joined Pan Am thinking somewhere, on some flight, I would find an ambassador who would offer me a job.”  It happened I told him; I did have an ambassador on one of my flights.  Just as I was about to mention my degree in political science and international relations and mention that I’d like to work in an embassy the plane hit a clear-air pocket and dropped 500 feet.  The dinner I was serving landed smack on the ambassador’s lap!  Not a good introduction for a potential job applicant.  The Senator raised his eyebrows and chuckled.

Senator Dole is a kind, delightful man; I still can’t believe my good fortune to have been invited to meet with him.  That invitation resulted from having met his personal attorney at the American Red Cross Tiffany Circle Summit in June.  She asked if I had sent the Senator a copy of my book, Destination Unknown, Adventures of a WWII American Red Cross Girl?   Through her I sent an autographed copy that resulted in the invitation to Washington.

We never know where life’s twists and turns will lead.

The Tiffany Circle experience came from a having met Moe Rouse, the speaker at a women’s club meeting in Cincinnati, Ohio.  When she was introduced her philanthropic work for the American Red Cross was highlighted.  I made a beeline for her after the speech.

Moe opened the door for me to bring my books to the Tiffany Circle Summit and to be one of two featured authors at the book-signing event.  The other was the First Lady of Quebec, Michele Dionne.  It was at the book signing that I met Senator Dole’s attorney.

That’s why it’s so important to always be open to possibilities.  They can sneak up on you anytime, anywhere and often in the most improbable of ways.

Look what can happen, you might meet an American legend!