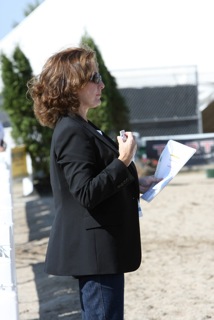 Over 40 years experience in the horse business and with a salesman’s instinct, Kathie helps others make their mark in the unique world of equestrian sports and events.  The horse industry is as much social club as it is business.  And that’s good news.

In a world where people want to connect and want to have fun, horses offer a conduit to make that happen.  But sometimes we, who are already immersed in the action, forget how special and important what we have, and offer, can be to others.

Instead, we keep trying to sell our products and services to the same people, at the same events.  While they are doing the same thing to us.  Then we ask why it is we can’t sell anything!

Kathie’s expertise is helping others see where their markets potentially exist and making a plan to capture them.  With creative thinking, a positive attitude and hard work, the impossible often becomes possible.

To introduce the acquisition of the chief sire of the Russian Arabian stud by an American syndicate, Kathie sent a film crew and photographer to Russia to capture that culture’s horse husbandry and the stallion’s lifestyle and progeny.  She had a display made that replicated New York’s famed Jockey Club restaurant, created leather brochures filled with photographs taken in Pyatigorsk, and hosted hospitality events from start to finish of the Arabian Horse National Championship Show.

She brought Tiffany & Company into the horse industry as a corporate sponsor and vendor.  Kathie hired caterers to create Breakfast at Tiffany’s, complete with classical musicians, as guests were introduced to Tiffany’s CEO and other company executives.

Then there was the trade show without a display.  It was up to Kathie to come up with something.  She found an authentic organ grinder and his Capuchin monkey, Poco; hired bartenders from the local Mexican restaurant to make and serve margaritas, and rented a popcorn machine so the aroma of freshly popped corn would compel people to find the no-display, display.

If you need help in delivering your message and generating interest in your farm, horses, products or services, talk to Kathie.